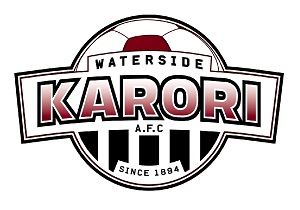 Waterside Karori AFC is an association football club in Karori, a suburb of Wellington, New Zealand. They currently play in the Capital Football Central League.

Waterside were originally based at Kaiwharawhara at Wellington's waterfront, a location still used by Waterside Karori. Waterside was a successful club at a national level in New Zealand in the 1930s and 1940s, winning the Chatham Cup in 1938, 1939, 1940 and 1947. However, the club was damaged by the wider effects of the 1951 waterfront strike and took years to recover.

Swifts were initially itinerant but settled in Karori in 1950, changing their name to Karori Swifts in the 1960s.

At the time of the merger, Waterside had sponsorship and was playing in the National League, but had a relatively small player base. Swifts, on the other hand, had a large player base, both senior and junior, but lacked top-level success. The merged club adopted the Waterside strip of black and white vertical stripes with the maroon Swifts strip being retained as a second strip.

In 2004 it became one of the founding principal clubs of the Team Wellington franchise in the New Zealand Football Championship.