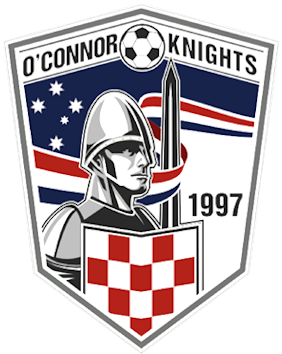 Founded in 1997 by Canberra’s Croatian community in North Canberra, O’Connor Knights is the second soccer club in Canberra with Croatian heritage (alongside Canberra Croatia FC in Deakin). O’Connor Knights previously competed at the top level of ACT soccer between the years of 2004 and 2009 but has spent the majority of its existence in the second division of ACT football.

O’Connor Knights has regularly competed in Croatian Cup (Australia & New Zealand), one of the oldest ethnic soccer tournaments in Australia, founded in 1974. The Knights won the national tournament, which was being hosted by Canberra Deakin, in 2004.

O’Connor Knights were promoted to the ACT Premier League (division one) for 2004 following the conclusion of the 2003 season. The Knights finished premiers of State League One (division two), beating former NSL club Canberra City to top spot by six points. UCU Pumas finished last in the Premier League in 2003 and were relegated to State League One.

O'Connor finished sixth in the Premier League in its first season in the top flight, missing out on the finals series by five points. The Knights performed better the next season in 2005 when the team finished second in the Premier League, behind Canberra Deakin, and qualified for finals. O'Connor won the major semi-final against Canberra Deakin 2-2 (7-5) on penalties. The two sides met again in the grand final, at Hawker Enclosed, where a fifteen minute goal to D.Camara secured the championship for Canberra Deakin over O'Connor.

The Knights next qualified for finals in 2007 after the club finished fourth in the league. Saturday 8 September 2007, The Knights faced-off against Canberra Olympic at the Belconnen Soccer Centre (now McKellar Park) in the minor semi-final but lost the match 1-4.

O’Connor Knights backed up the performances of 2007 in 2008 and again finished fourth in the league and qualified for the finals championship. The Knights were defeated in the minor semi-final by Belconnen United 0-3, ending their season.

2009 was the last season O'Connor Knights competed in the top division of ACT soccer , bringing an end to a six year spell in the top flight that started with promotion in 2004. The club finished the season mid-table in sixth place behind Tuggeranong United in fifth and ahead of ANU FC in seventh, missing out on finals in the process.

In 2011, the Knights had a strong regular season, finishing second behind White Eagles and again qualifying for the finals series. On 27 August 2011, O’Connor were defeated in the semi-finals by the same opposition as the previous season (White Eagles) in what proved to be a high scoring affair (2-5) at ANU Willows 1. Despite the loss O’Connor advanced to the preliminary final at Kaleen Enclosed on 3 September 2011. There the Knights were again defeated, this time to ANU FC 0-1.

2017, O’Connor Knights finished runner-up in the Capital League for the first time. Five points behind Premiers ANU FC and four points ahead of Weston Molonglo FC in third. O’Connor then defeated ANU in the semi-finals 2-1 thanks to a second half brace of goals to Danny Krajacic to progress to the grand final directly. The Knights faced ANU, who beat Weston Creek in the preliminary final, in the grand final on 3 September 2017 at Woden Park. The two teams finished the first half locked at 1-1 but a second half saw a score blowout to ANU and the university team claimed a 5-1 victory over the Knights by the end of the match.