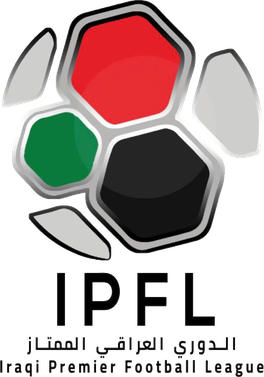 The Iraqi Premier League (Arabic: الدوري العراقي الممتاز), is the top level of the Iraqi football league system. Contested by 20 clubs, it is operated by the Iraq Football Association (IFA) and operates on a system of promotion and relegation with the Iraq Division One.

The league was formed by the IFA in 1974 as the Iraqi National Clubs First Division, the first nationwide league of clubs in Iraq. The current format sees 20 teams playing 38 matches each (playing each team in the league twice, home and away), totalling 380 matches in the season.

Of the 80 teams to have competed since the inception of the league in 1974, eleven have won the title. Al-Zawraa are the most successful club with 14 titles, followed by Al-Quwa Al-Jawiya, Al-Talaba and Al-Shorta, who together contest the Baghdad derbies. The current champions are Al-Shorta, who won the title in 2021–22.

Up until 1973, leagues in Iraq were played at a regional level. The Central FA League, the Basra League and the Kirkuk League were all founded in 1948, while the Mosul League was founded in 1950. The first nationwide league to be held in the country was in the 1973–74 season when the National First Division was formed, with Al-Quwa Al-Jawiya being crowned champions. The IFA then decided to replace the competition with a new National Clubs First Division which would only be open to clubs and not institute-representative teams.

The league held its first season in 1974–75 and was originally composed of ten clubs. The first ever Iraqi Premier League goal was scored by Falah Hassan of Al-Tayaran (now known as Al-Quwa Al-Jawiya) in a 1–1 draw with Al-Sinaa. Al-Tayaran were crowned champions of the inaugural season which featured the following teams:

Ever since the Iraqi Premier League began, it has been dominated by the four biggest clubs in Baghdad: Al-Quwa Al-Jawiya, Al-Shorta, Al-Talaba and Al-Zawraa, who together contest the Baghdad derbies. From the 1989–90 season until the 2005–06 season, the league was won by one of the four Baghdad teams every time. After the 2003 US invasion of Iraq, players started to leave the Baghdad-based clubs and join clubs in the North such as Erbil and Duhok due to the poor security situation in the capital city. This led to a shift in the dominance of the "Big Four" as Erbil won three consecutive league titles from 2007 to 2009 with Duhok winning the league in 2010. In the 2008–09 season, none of Baghdad's Big Four clubs finished in the top four and this is the only time that this has happened in the history of the league; the top four spots were occupied by Erbil, Al-Najaf, Duhok and Al-Amana. However, Baghdad's Big Four have since returned to dominating the league, having won all titles since 2015–16.